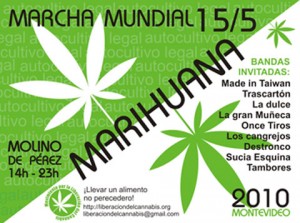 There was a line up of reggae bands that were going to play… But weather just didn’t go along with those plans.

My buddy and I got out to Punta Gorda (a beautiful little beach community about 7K outside of the heart of Montevideo). The dark clouds had been hanging around, but it was just a little cool 11-12C…

We met some cool locals. They shared some Grappamiel… It’s Grappa mixed with honey… It taste pretty good until you stop drinking, then you feel the burn in the back of your throat. It’s worth trying though.

They also had home grown green bud… It’s the best thing I’ve smoked since I’ve been here. The quality was as such that it would sell for U$S 150 per oz in Southern California.

Just as we finished smoking a bowl it started to rain… The people setting it up started putting musical equipment away and were frantically covering up gear with tarps. So my buddy and I thought it was a good idea to catch a cab back to Pocitos.

Catching a cab in Punta Gorda in the rain was not as easy as we thought it was going to be. So we started walking in the direction of Pocitos.

I’m originally from Missouri and we found Missouri street in Punta Gorda… You can’t tell in the pic, but it was raining pretty decent at this time… I’m glad I had my cheap poncho. 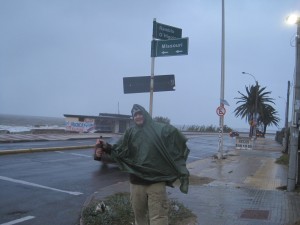 We finally found a small bar and we were able to get a beer and some pizza.

The bar was packed full and you could hear a pin drop when we walked in… Everyone was totally engrossed in the futbol (soccer) game on the t.v.

The game ended about 10 minutes after we walked in and obviously the entire bar’s team lost, because very few people said anything and almost everyone left. It was an interesting experience.

We ended up walking for a little and finally got a cab.

So if you ever had the question of, “Can I get Marijuana in Uruguay?”

The answer is “Yes you can!”

Is marijuana illegal in Uruguay?

Possession up to 5 grams is legal… Anything over 5 grams is illegal… But, up to 25 grams is considered for personal use and is overlooked.

Most of the herb here comes from Paraguay, Brazil and Argentina… It comes packed in 1 kilo bricks.

The weed is full of stems and seeds… It’s all sativa; the climate in this part of the world isn’t good for indicas.

The average weed here smells and taste like ass… actually horse piss. That’s because “apparently” that’s what the growers pour over the herb in their packing device to help make sure it compresses into a tight 1 kilo brick.

If you’ve ever got part of a Mexican brick, you know what “brick weed” is… Here, the bricks are tighter and more compact than Mexican bricks. 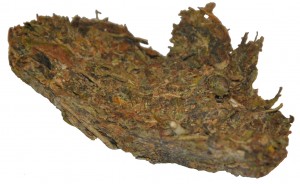 There is the elusive “cogollo” here too…

Sin similla ganja weed… In other words, the female flower of a marijuana plant with no seeds that was grown with some TLC. 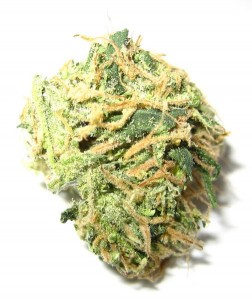 The most consistent thing about “cogollo” is the lack of availability. When cogollo comes around it is typically gone as fast as one hears about it.

As far as the marijuana in Uruguay goes… I call it “work weed.” Because it works and more often than not doesn’t leave you with a headache.

Marijuana is all around Montevideo… all you have to do is look for it.